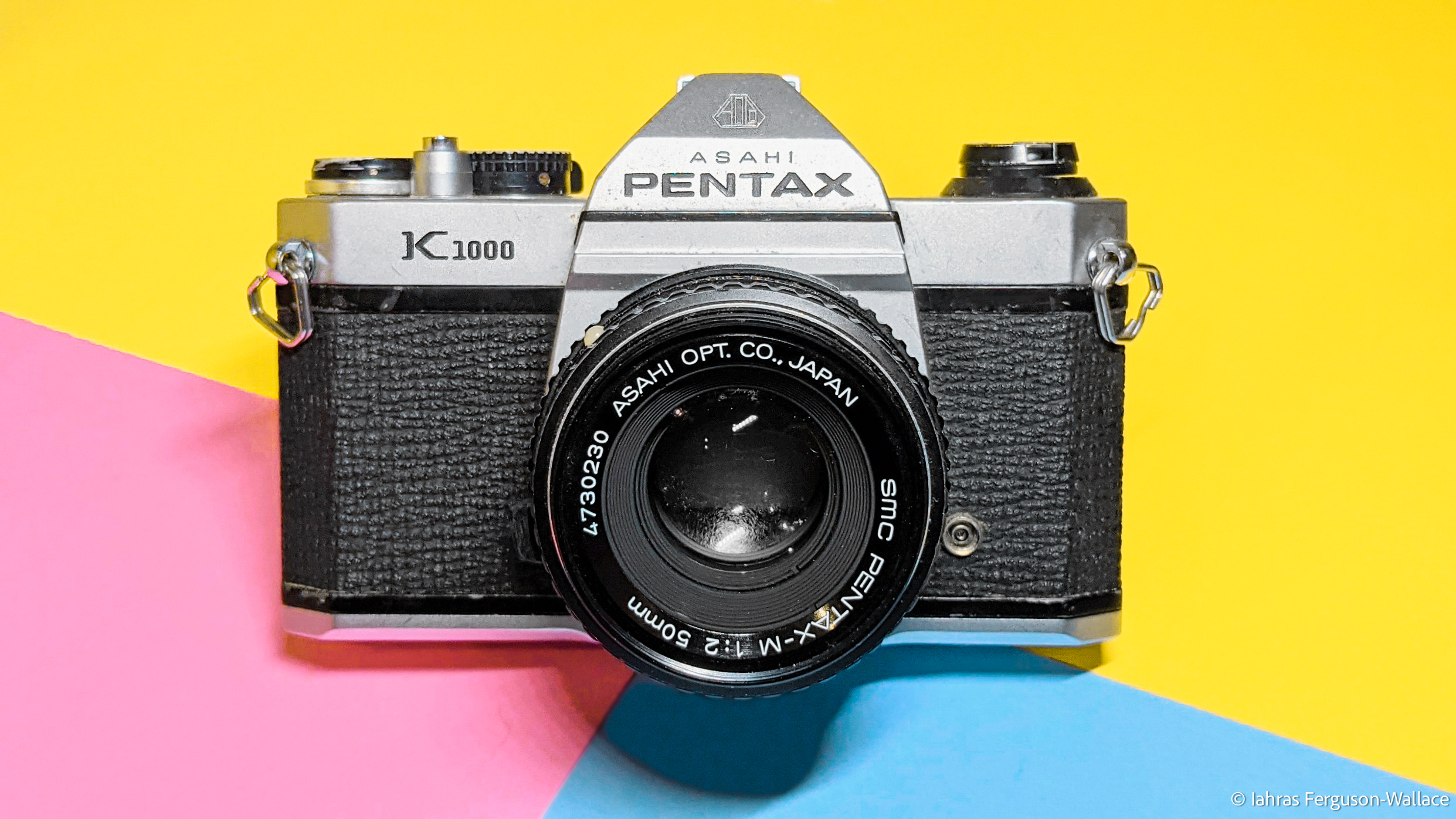 At least where I’m living, there was a very noticeable point in which film cameras got thrust back into the spotlight. Every college photography student has been clamouring for one. Naturally, people started to flock to a select few models, one being the cult-classic Pentax K1000.

Being someone who spends a lot of time in charity shops hunting for cameras, I happened upon one of these beauties, with a 50mm lens, for just £10! This was a couple of years ago. To pick up a working K1000 now, you’ll be looking at around £150-250 (depending on the quality), and it’s easy to see why.

One of the best SLR film cameras for beginners

This camera is arguably one of the easiest for a beginner to learn. It is simplistic with minimal settings and a sturdy body and a built-in light meter. It has also got a hot shoe for a flash if the situation calls for it. That said, as a camera with shutter speeds of 1-1/1000th (plus bulb) and just 1/60th X/MX-sync, it is undoubtedly more limiting creatively for students who swear by it in particular, compared to something like the Pentax KX.

As a side note, I’ve also heard criticism of the matchstick through-the-lens light meter, which I see could get sticky or out of whack should the camera take a heavy hit. Still, I loved being about to over/underexpose my photos as much or as little as I wanted, as opposed to the “-/o/+” led display you’d find in some cameras such as the Nikon FM.

K1000 and its reputation

Despite criticism of the K1000 through its life, people adored it. The camera gained a huge reputation. With film SLRs being released with motor-drives, autofocusing, and better metering, the K1000 thrived even though numerous reports of the models predicted demise through the years. Whether it was due to a teachers recommendation to their students, or traditionalist photographers who didn’t care for the bells and whistles that newer models incorporated, Pentax had to keep producing the K1000 in response to a seemingly never-ending demand. A new resurgence of film photography among students has got everyone scouring relatives’ lofts and all the charity shops in hopes of getting their hands on one. I realised I had lucked out – I’ve loved every minute of shooting with it.

While it wasn’t my first film camera (the Olympus Superzoom has that title), it was my first experience shooting something manual, so this camera has a special space in my heart. My Pentax came everywhere with me, and the standard 50mm lens it came with was a dream to play with- smooth to focus and crisp images to match meant that the entire experience was very welcoming to manual analogue photography. I think one of the big things I loved about this camera is how strong it feels – being someone that would be around skaters, or going on some kind of adventure, I never really had to worry about this camera like I would with anything digital, or even my Superzoom.

I mentioned near the start of this review that the K1000 was pretty bare-bones, and that makes it so lovely to shoot with! All the settings are right in front of you, and easy to figure out how the camera operates, which is key really when you want the camera to appeal to the masses. It’s worth noting there is no window or the like inside the viewfinder that would allow you to adjust the shutter speed or aperture without having to take the camera away from your eye, which slows you down between shots and could result in something missed if you’d prefer to simply snap away.

The Pentax K1000 is the camera that made me fall back in love with photography after a time in which I started to get bored of shooting digital (and not understanding photoshop to play with the images), which makes it a camera that I, along with a lot of other people, will always love.

Have you ever used a Pentax K1000, or are you hankering after one? Got any thoughts about this Pentax K1000 review? Shoot me a message over on Instagram – @eyespiah! Oh, and thank you for reading! Give it a share if you love it, and let me know if you do!

Happy Friday from Cool Film. Try to get out this w

What’s your main reason (or excuse) for travelli