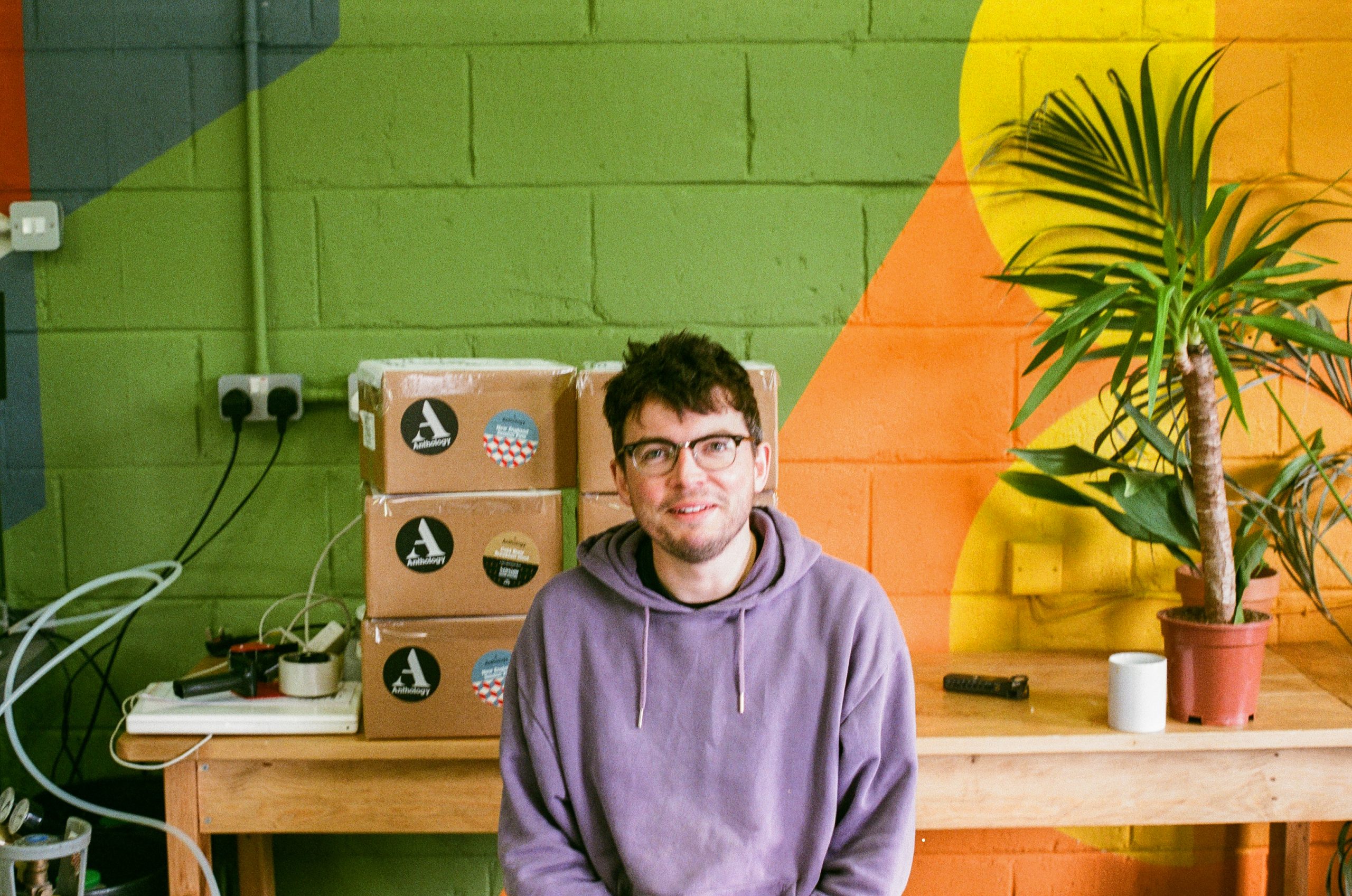 Two weeks of beautiful sunny weather in the UK calls for at least double that of overcast, soggy, miserable British weather, and in a classic move of good fortune, those clouds land on the day that I have arranged to head to Armley’s independent one-person brewery Anthology Brewing to hang out, have a chat and take a few photos.

Anthology Brewing is an unassuming craft brewery in Leeds, sitting snuggly amongst the industrial estates on Armley Road; it runs out of 2 small rooms; one for brewing, the other hosting casks and kegs ready to be sent out to waiting bars and pubs. Much like the brewery itself, Liam is friendly, modest, and refreshingly honest about brewing as a craft, his aspirations for the business and his views on the current state of the economy.

With it being an overcast day and shooting mostly inside (though an open space with large windows) I brought two medium speed 35mm films with me: the much-loved Portra 400 and the under-rated (in my opinion) Fujifilm Superia X-Tra 400, I’m shooting on my trusty Olympus OM2N and pushing both to 800. Pushing and pulling films is a relatively new experience for me, as somebody who’s been slowly learning the ropes, box-speed is the safe option, but after plenty of research, and with Portra 400’s well-admired exposure latitude, I decided that the extra light sensitivity will give me more options and hopefully give me some interesting results.

“Beer’s not the whole thing, it’s more about enhancing situations.”

Having moved to Leeds to study music, Liam spent some time making music his career: “I played in a Beatles tribute band (laughs), I was Paul McCartney, we did some cool stuff, but we did for 4-5 years.” And during that time homebrewing, which led to working for a few well-known breweries, and then 3 years ago starting his own. We chatted a bit about this change in direction and about how to manage to turn something you love doing into a job.

Liam: “I still make music, but I guess having the pressure taken off from having to make money doing music gives you creative freedom…. my aim is to not spoil another hobby. So that’s why I’m not obsessed with the idea of constant growth like work-life balance is so important and I’d rather have a little less money and an extra day of freedom a week you know. People are obsessed with working themselves into the ground and it’s just not healthy and people wear it like a badge of honour, and I’m not into it at all, it’s silly.”

Leeds’s beer scene is busy with breweries, bars and venues popping up all the time, and Liam explains one of the things he enjoys most about brewing is the chance to combine creating beer with other creativity.

Liam: “I like beer to be combined with an activity, that’s why I like the Brudenell and Wharf Chambers, you know what I mean, if there’s a gig on you can watch at the same time as drinking nice beer. For me it’s all about the company you’re with and who you’re drinking it with, what the situation is. If somebody’s drinking the beer and goes ‘Fu**ing hell, that’s nice.’ then gets on with the conversation and has a nice time with friends, for me, it’s more about that. It’s (beer) not the sole thing, it’s more about enhancing situations.”

“The support from other independent businesses is always really good. People tend to, on the whole, look out for each other and buy from other businesses when you can.”

Me and Liam get on well, we share a lot of the same opinions and interests as well as a maybe slightly jaded view on the current state of the political climate. And although creating Anthology is a way to do things his way, and maybe contribute in a small way to a larger change in the industry; he is well aware that his work-life balance position is one he’s lucky to be in.

Liam: “I’m happy to grow a bit, but generally, most business growth is at the expense of someone. Someone is getting treated like crap, usually, it’s getting paid minimum wage or being exploited in some way or another, and especially in this industry, you know, it’s like an open secret.”

His experience as an independent business has been positive though, finding the community of local and small businesses is incredibly supportive.

Liam: “The support from other independent businesses is always really good, people tend to, On the whole, look out for each other and you know, buy from other businesses when you can. You know, like if ever I run out of something or forgot to order something I know I’d be able to contact various people, it’s the same if someone needs a malt like, everyone helps each other out, it’s cool.”

In classic Jake fashion, I’m far too eager to be hanging out and so I’m maybe a bit too snap-happy, that paired with the low light, wide apertures and forgotten tripod did cause for a few blurry photos. Despite this though I’m really pleased with the results.

Portra is well known for performing well up to a couple of stops over or underexposed and my results show exactly that, it’s the Superia however that I’m really impressed with; one of the big criticisms of Superia, in general, is that sometimes the results end up coming out quite thin, but pushed it seems to give it more contrast and punchier colours. Saying that, I feel you do lose some of the sharpness of the image that you would usually find at box speed, but in reality, that’s just a niggle, and when you’re talking about a £5 difference in price between the two films, and even greater price difference if you were to compare it to Portra 800 or Cinestill 800t I really feel it holds up well.

Knowing Liam’s interest in film photography, we spoke a bit about his set-up and why it’s something he loves experimenting with.

Liam: “I have an Asahi Pentax Spotmatic 2, the Light Meter is broken. I don’t really know what I’m doing, but it’s fun. It’s sort of like music in that sometimes limiting yourself forces creativity, so the limitations of the format it makes you commit to something so much more, you know you’re not just endlessly snapping crap.”

Now that lockdown is easing in the UK Liam spoke about his hopes and plans for the brewery going forward: “I always like doing stuff that something to do with art, music. You know my background is in music, so whenever I can try and combine those things, any form of creativity is all good.  I’m hoping to be able to do some more taproom events in the (future), I keep meaning to do it, but I keep selling out of beer haha.”

You can find Anthology Brewery online here as well as on Facebook and Instagram and in bars all around Leeds.

Happy Friday from Cool Film. Try to get out this w

What’s your main reason (or excuse) for travelli